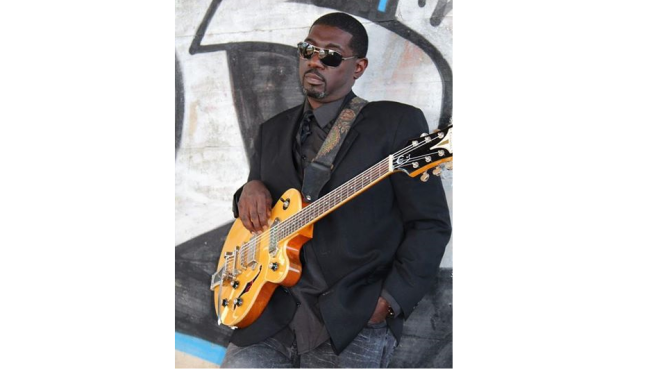 The Jackson based blues and southern soul artist formerly known as Stevie J (Stephen Johnson) now goes by the stage name Stevie J Blues.  Although he still answers to Stevie J as he’s done his whole life, the addendum is so fans can distinguish him from Atlanta based Stevie J (Steven Jordan) of the reality show Love and Hip Hop Atlanta (LHHA). That Stevie J has had an arguably low key career in the music industry that stretches back to the 90’s. But since the 2012 premier of LHHA, he’s made a somewhat questionable and not so low key name for himself. “It’s so funny because before Love and Hip Hop Atlanta came out, if you Googled Stevie J, my picture would come up,” Johnson says.  “Every now and then somebody will hit me on facebook and ask me what Joseline (Jordan’s wife) is doing and I’m like man you got the wrong person.”  But Johnson takes it all in stride.

Johnson, 40, grew up playing music in the church, eventually lending his skills to gospel greats such as Shirley Caesar.  But it wasn’t until legendary blues man Bobby Rush took him under his wing that he made the move to blues and southern soul. The two guitarist met at Malaco Records in 2001, shortly after Rush had a serious car accident in Pensacola, Fla. Johnson joined Rush’s backing band in 2002, and played with the Grammy nominee for about five years before setting off for a solo career.

Armed with soulful and impressive guitar skills and vocals, Johnson released his debut CD, “2 Sides of a Man”,  on Help Me Records in 2008.  Johnson was the last artist signed to the label by owner Senator Jones, a deejay and music industry veteran. Jones, responsible for the success of blues and southern soul artist Sir Charles, passed away six months after Johnson’s debut album was released.  The single “Because of Me” still managed to reach No. 1 on the Southern Soul chart despite little promotion.

Fast forward seven years and two more albums and Stevie J Blues is preparing his fourth CD “Back to Blues. ”Of course if you count both discs of 2010’s “The Diversity Project” separately – the blues disc entitled “Standing at the Station”, and the southern soul disc entitled “Soul Sessions” –  the new recording will actually be his fifth CD. Jump to “Another Jody Song” video.

“Back to Blues” is set for a fall 2015 release on Johnson’s independent label, PK Records.  “It’s heavily blues driven but it’s going to play with different genres,” Johnson says of the new album.  His intention with “Back to the Blues” is to expose the blues elements present in others genres including pop, rock-n-roll, and R&B.

To give faithful fans a taste of what’s to come and bring new fans up to speed, Johnson will release a six song EP this summer containing four new songs and two songs from the  2013 LP, “Unstoppable”, which gave fans the catchy “Come Here Party.” In the past some of Johnson’s southern soul song lyrics have gotten him into hot water with his youngest brother, Jay Johnson, who also happens to be his pastor at Abounding Grace World Healing Church. For instance songs such as “Married Girlfriend” and “Stolen Wine” contain unambiguous tales of infidelity. Perhaps he’ll avoid a scolding this time around since “Back to the Blues” promises to deliver a crossover radio-format friendly playlist. Or perhaps not.  Either way, Johnson’s fans won’t be complaining.

Hailed as the new face of Delta Blues and Mississippi’s best kept secret, Johnson is very passionate about the history of blues music.  All Access Music Magazine called him a “limitless bluesman” because he is so well versed in that history and shares it with fans whenever he hits the stage.  At any given live show Johnson says he gives the audience blues “from yesterday, today and tomorrow.” He wants listeners to know that when they come to see him perform, they should “come expecting a history lesson in the blues.”

A version of this article first appeared in Jackson Free Press on April 1, 2015. (Shout out and much appreciation to JFP music editor Micah Smith.)